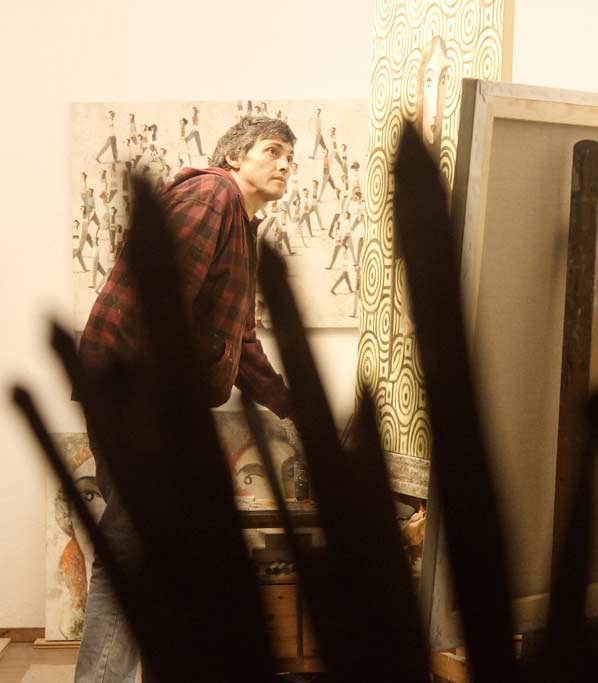 Didier Lourenço was born in 1968 in Premià de Mar, Barcelona. At the age of 19 he began working in the lithography atelier of his father, where he learned the trade of lithography.In 1988 Didier made a corner of the atelier his place for painting on canvas and paper. He shared his time between painting and printing lithographs for himself and professional artists. The atelier would prove to be his best classroom, a place where Didier would build his education in the world of painting. That year he presented his first individual show and also edited his first collection of lithographies.
In 1991 Lourenço won a prestigious prize for young artists making a breakthrough into many galleries throughout Spain showing in various solo and group exhibitions.In 1995, Didier Lourenço moved into his own studio, where he would devote himself to painting, but never stop making lithographs.
In 2000, a prestigious publisher and distributor of posters took his work worldwide. This global presence quickly sparked the interest of galleries, who would present his original work. Didier traveled around the world to his solo exhibits in New York, Seattle, Los Angeles, Hong Kong, Puerto Rico, New Orleans, Nashville, South Africa Las Vegas, Miami, Singapore, among others. His days are filled with trips and exhibitions. His individual and collective shows continue.
Legal notice | Legal policy | Cookies policy
© Didier Lourenço - Designed by Pixel Comunicació
We use cookies to provide a better online experience. By using our services, you agree to our use of cookies. Read More Cookie settingsACCEPT
Privacy & Cookies Policy